Bodhi Tours and Treks Chitwan National Park is one of the premier drawcards in Nepal, and there was little damage to areas visited by tourists in the 2015 earthquake

Looking for our tours in or around Chitwan? 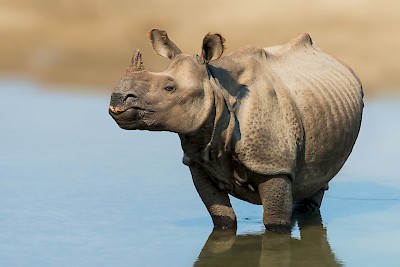 Chitwan National Park is one of the premier drawcards in Nepal, and there was little damage to areas visited by tourists in the 2015 earthquake. The World Heritage–listed reserve protects over 932 sq km of forests, marshland and rippling grassland, and is home to sizeable wildlife populations. It’s little wonder this place is so popular.

Meaning ‘Heart of the Jungle’, Chitwan is famous as one of the best wildlife-viewing national parks inAsia, and you’ll have an excellent chance of spotting one-horned rhinos, deer, monkeys and up to 544 species of birds. If you’re extremely lucky, you’ll see leopards, wild elephants and sloth bears – though it’s the once-in-a-lifetime chance to spot a majestic royal Bengal tiger that attracts people in their droves.

Sadly, Chitwan lost many animals during the decade-long Maoist insurgency, when the army were preoccupied with the conflict and unable to provide adequate protection from poachers. However, the good news is that recent census figures show rhino numbers are substantially recovering (503 individuals in 2011) and tiger numbers are steadily increasing (around 120 adults in 2013).

The best option for experiencing Chitwan National Park is to stay in one of the luxury lodges located on the edge of the park away from the crowds at Sauraha. The government stopped the luxury lodges from operating inside the park in 2012. Most of these lodges have developed alternative lodges just outside the national park boundaries. Though this experience doesn’t come cheaply, the sense of adventure, less crowding and access to more remote parts of the park make it very worthwhile.

That said, most budget travellers opt for the more affordable lodging in Sauraha, a tourist village on the northern bank of the Rapti River, a border of the park. Sauraha has a lively backpacker scene, and while many enjoy its social nature – it's a great place to have a beer watching the sunset over the river – others are let down by its insensitive and overly commercial development.

Two whole days in the park is really the minimum for wildlife spotting. The nature of dense jungle, tall grass and the nocturnal hours kept by many animals are all factors that make spotting animals far from guaranteed. A good approach is to treat wildlife viewing as one would the pastime of fishing: some days you’ll get plenty of bites, others not a nibble. Irrespective, it’s all about the thrill of the chase and being out and about in tiger and rhino country. Be aware that the popular four-day, three-night packages out of Kathmandu and Pokhara include a day of travel at either end.