Bodhi Tours and Treks Namo Buddha or Takmo Lüjin (Wyl. stag mo lus sbyin) is an important Buddhist pilgrimage site of Nepal, and one of the three main stupas of the Kathmandu valley

Looking for our tours in or around Namo Buddha? 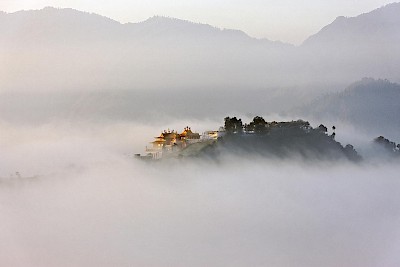 Namo Buddha or Takmo Lüjin (Wyl. stag mo lus sbyin) is an important Buddhist pilgrimage site of Nepal, and one of the three main stupas of the Kathmandu valley. Situated about 40 km to the south east of Kathmandu city, the stupa built on the bones and hair of prince Mahasattva (Tib. Semchen Chenpo), stands on the slopes of the Gandha Malla hill.

According to the Jatakas and several sutras, Mahasattva was one of Buddha Shakyamuni's former incarnations. He was the youngest of the three sons of king Maharatha. One day as the three brothers were walking through the forest, they saw a tigress with the five cubs she had given birth to. She was so hungry she could hardly move. The three princes went away, but Mahasattva decided to go back and started to cut his flesh to give it to the tigress to eat. When his brothers went to look for him they found only his bones and hair. The stupa was built on top of these remains.

Walking up the hill from the stupa, one can reach a place where the scene of the Buddha giving his body to the tigress is engraved in stone. According to the oral tradition, this is the actual place where the Buddha gave his body.
Following the ridge to a second summit on the same hill, there is also a small stupa which is said to mark the den of the tigress. There, pilgrims lie down on the ground as if giving their bodies, and hair and pieces of cloth are hung to the branches of the tree for protection.

Statue of the Buddha and tigress near the den of the tigress The Tibetan name Takmo Lujin derives from the events that took place on the site (stag mo means 'tigress', lus 'body', and sbyin 'to give'). Local people call it Namo Buddha (Lit. 'Homage to the Buddha!'). Because the region was infested with tigers, the local people wouldn't call it by its actual name, which contains the word 'tiger', and so, as a way to protect themselves, they got into the habit of calling it “Namo Buddha.”

On the eastern side of the hill is the monastic complex built by Khenchen Thrangu Rinpoche—Thrangu Tashi Yangtse Monastery.