Bodhi Tours and Treks Tucked away in a side valley off the Arniko Hwy, about 7km south of Banepa, Panauti sits at the sacred confluence of the Roshi Khola and Pungamati Khola

Looking for our tours in or around Panauti? 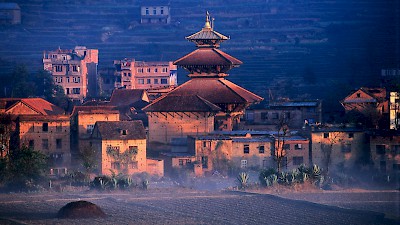 Tucked away in a side valley off the Arniko Hwy, about 7km south of Banepa, Panauti sits at the sacred confluence of the Roshi Khola and Pungamati Khola. A third ‘invisible river’ called the Padmabati is said to join the other two rivers at Panauti, making this a particularly sacred spot. Accordingly, there are some fabulously ancient temples that have stood the test of time partly because of Panauti’s legendary resistance to earthquakes. This certainly held true during the 2015 earthquake, when the town escaped with minor cuts and bruises, though less so in the smaller tremor in 1988, which damaged several monuments.

Panauti was once a major trading centre with its own royal palace but today the small town has a bustling new quarter and a serene old quarter. Most of the town's few visitors come on day trips, but we recommend staying over and exploring the streets at dawn and dusk, when they are at their most magical. As well as its ornate temples, the village has some striking Rana-era mansions, which have been restored with assistance from the French government.